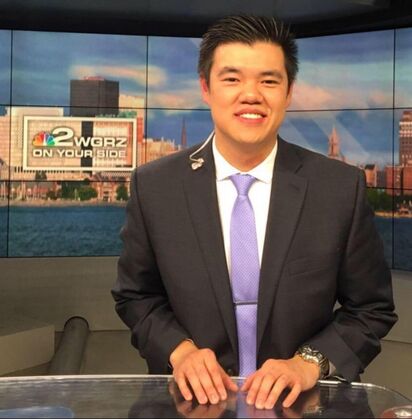 Carl Lam is a lifelong Western New Yorker who is thrilled to have the opportunity to work in Buffalo, the city he calls home.

He currently serves as a meteorologist across two countries. He joined WGRZ-TV as a fill-in meteorologist in December of 2016 and was promoted to Weekend Meteorologist in October 2021. A versatile forecaster, he has provided additional weather coverage for other TEGNA owned stations including WKYC-TV in Cleveland, WBNS-TV in Columbus, Ohio, and WZZM-TV in Grand Rapids, Michigan.

In August of 2018, he joined CityNews 680 (CFTR-AM) in Toronto as a meteorologist providing forecasts every 10 minutes for the Greater Toronto Area. In April 2022, he added Midday Meteorologist duties for CityNews 1130 in Vancouver and can be heard every weekday. Additionally, he is an Endorsed Weathercaster by the Canadian Meteorological and Oceanographic Society as of March 2020. Within Canada, he has provided additional weather coverage for Calgary, Kitchener, hurricane coverage of Dorian and Fiona for Halifax, has filled in at CITY-DT in Toronto and CKVU-DT in Vancouver. He has also appeared internationally on BBC World News, BBC News, and BBC Radio 5 Live.

Previous roles include fill-in meteorologist at WROC-TV in Rochester, New York from 2019 to 2020, fill-in meteorologist at WHEC-TV from 2020 to 2021, and fill-in traffic anchor with the Niagara Frontier Transportation Authority appearing on WGRZ-TV from 2014 to 2019. He also worked as a part-time with Buffalo Toronto Public Media from 2013 to 2022 in various capacities. He was on-air host for WNED-FM, the classical music station serving Western New York and Southern Ontario, from 2013 to 2018, filled in as a Program Host from 2018 to 2021 on WBFO-FM, the NPR affiliate, and on-air pledge talent on all platforms from 2013 to 2022.

As a higher education professional, he works full-time as a Resource Analyst in the Office of Resource Planning at the University at Buffalo. From 2016 to 2022, he worked as a Senior Academic Advisor, specializing in Prehealth Advising, in the Exploratory and Pre-Professional Advising Center. He advised hundreds of undergraduate students seeking admission to professional health schools and coordinated the semi-annual screening and evaluation process.

He began study on the violin at the age of 4 with Greta Buck. Today, he is an active violinist in the Western New York and Northwestern Pennsylvania area by holding membership in 5 orchestral ensembles. He currently plays as a regular substitute violinist with the Erie Philharmonic, as a section violinist with the Western New York Chamber Orchestra, and occasionally tours with Elton Rohn, the Elton John Tribute Band, in the United States as the lead of the string section. Previous violin teachers include David Colwell, Amy Glidden, Cyrus Beroukhim, and Hanna Hurwitz. He also studied conducting under the guidance of Dr. Rachel Lauber.

​As an artist-administrator, he is expanding his roles in administration of musical ensembles. He has served as Chair of the Search Committee for a new Conductor/Music Director for the Orchard Park Symphony Orchestra and he co-chaired a year-long search for the Cheektowaga Community Symphony Orchestra for their new conductor/music director. He also serves as the General Manager of the UB Symphony Orchestra and is a contractor with Buffalo Opera Unlimited and Westminster Presbyterian Church. He also completed the Essentials of Orchestra Management Program through the League of American Orchestras in 2018.

In his spare time, he volunteers his time to various nonprofit organizations. He is currently the board president of the Western New York Chamber Orchestra and volunteers his time with Hospice and Palliative Care of Western New York. From 2015 to 2022, he was a board member of the Buffalo Broadcasters Association and coordinated educational engagement programs and social media platforms. He has also served on the boards of the Greater Buffalo Youth Orchestra, Fredonia Alumni Association, and the Buffalo Presidential Center.

He earned a Master of Education (EdM) in Higher Education Administration and a Master of Music (MM) in Music Performance from the University at Buffalo in 2016 and 2018, respectively. He earned a Bachelor of Arts in Applied Music and Journalism along with a Bachelor of Science in Audio/Radio Production from Fredonia in 2014. Additionally, he earned his Broadcast Meteorology Certificate from Mississippi State University in August of 2018, has completed advanced coursework in Communication from the University at Buffalo, and recently earned the Certificate of Advanced Study in Professional Writing and Digital Communication from the  Department of English .

He was recently named to Buffalo Business First's 30 Under 30 Class of 2022 for his achievement and community involvement, an international finalist in the World's Challenge Challenge Competition in 2021, was awarded the Lanford Presidential Prize from SUNY Fredonia and the Chancellor's Award for Student Excellence by the SUNY system, both in 2014.

Outside of work, he is a self-proclaimed epicure and travels across the country to dine at Michelin Star restaurants.​
​